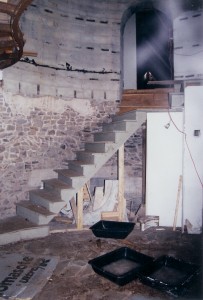 It is well documented, both in the newspaper, and on film that Phareloch Castle is haunted.  The castle gained national attention over seven years ago when it was featured on an episode of NBC’s “Unsolved Mysteries” program. It is believed that the castle is haunted by 37 ghosts, all friendly spirits.  It is currently the most haunted castle in New Jersey by friendly ghosts.playing at night in empty rooms. The castle changed hands many times, with various reports of manifestations. The Burlingames reported windows closing by themselves during a rainstorm, knocking on the front door when nobody was there, and a full apparition of a man, who faded away in front of their eyes.”

The main ghost is thought to be that of William Beatty, who died  before his beloved castle was completed. Shortly after his death, Beatty’s apparition started appearing in the house. His wife reported seeing him on a balcony, and a grounds keeper reported seeing him on the stairway. She moved away in 1941, and the castle became Chartwell Manor School. Several students reported seeing the ghost of a man with a German Shepard dog, and the sounds of the organ playing.

The castle is in the process of renovations, and the photos shown were taken as part of a ‘before’ and ‘after’ project undertaken by Susan Ridley.  Ridley is an artist, and art therapist, and finds the presence of so much spiritual energy perfectly natural and said that “ghosts are just another way of being, and if you show them respect, they will in turn respect you.

While taking photographs in the castle, Ridley was struck by how cold it was. The chill had nothing to do with drafts coming through the broken window, it was bone-chilling cold as she wandered through the deserted rooms. The flash kept seizing up, and there was a feeling of watchfulness. A presence was felt following her, and Ridley explained why she was there as she attempted to complete her project. When the film was developed, two frames showed a faint mist on the right corner of the print. One a distinct figure, arm outstretched coming down the stairs, and the other forming close to where Ridley stood. The pictures before and after these frames on the negative were clear, and there was no light source or explanation that could explain the mist. 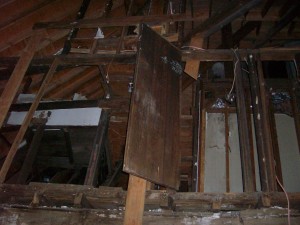